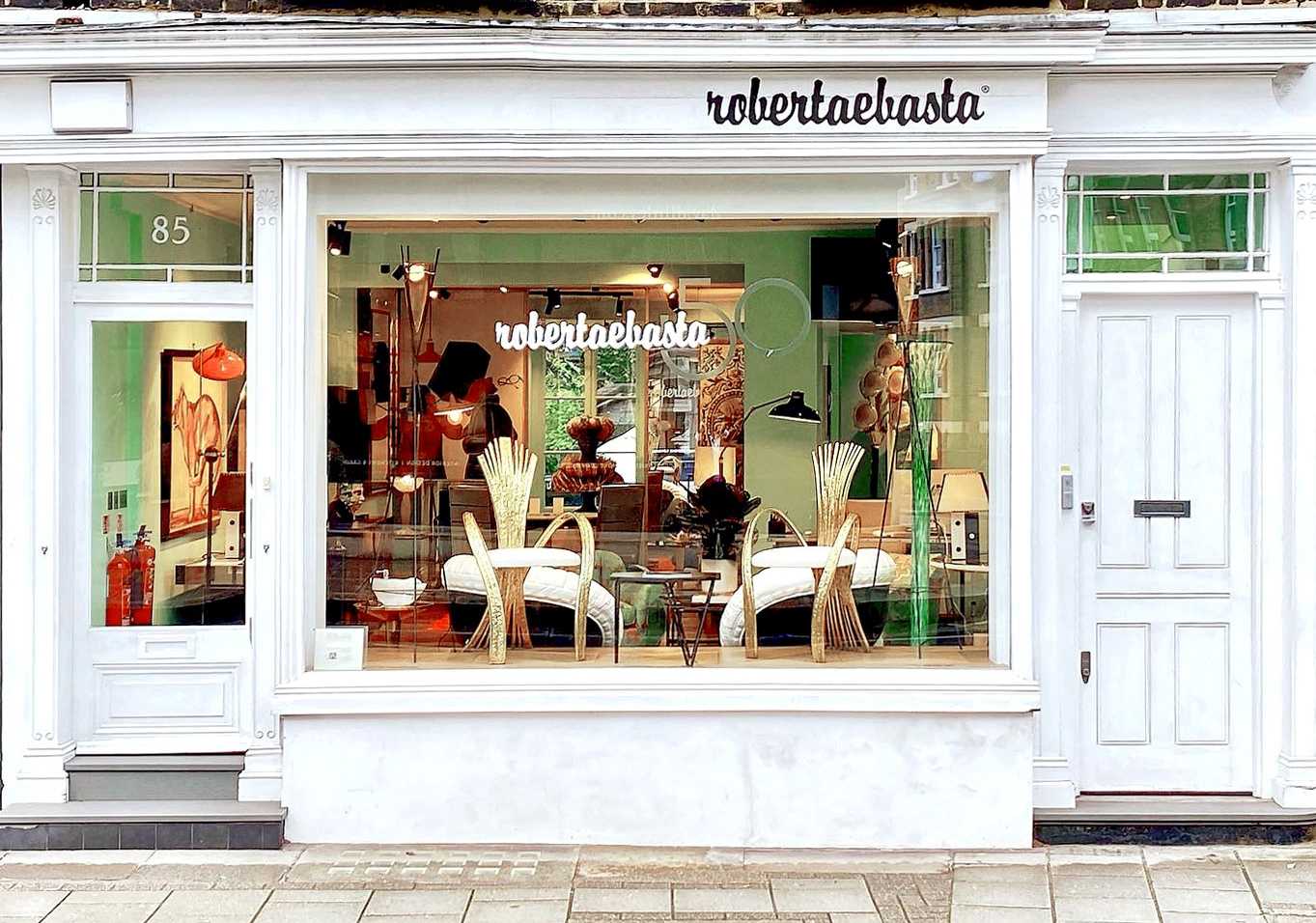 Roberta Tagliavini, the holder of "Robertaebasta" Gallery, situated in Via Fiori Chiari N° 2 in Milan, operates in antiquary sector since 1967; she is specialized in decorative arts of XX Century. Thanks to her capacity, practises as expert during important shows; she is enroled in the Provincial Art Dealer Syndicate of Milan since 1983; in January 1994 was elected as effective member of this Syndicate. In a second time she became treasurer too. The Gallery is member of the most important Antique dealers associations such as CINOA, FIMA, AAI (Associazione Antiquari Italiani), the prestigious SNA (Syndicat National des Antiquaires) and the members of the chambre royale des antiquaires et des négociants en ouvres d'art de Belgique. In 1986 Robertaebasta was invited to take part at the international New York show, where obtained an enormous success, still living nowdays. American customers were multiplied, including architects, interior designers and dealers. This international succes opened the doors to Europe, and then all over the world. In 1994 Robertaebasta Gallery was invited to the international show of Basilea, TEFAF (the European Art Foundation), a very prestigious and selective show. Tefaf show opened to Robertaebasta Gallery the German and Switzerland market too. Nowadays the Gallery participates with great success to the following International Exhibitions: Milano Internazionale Antiquariato, Masterpiece London, Brafa (Bruxelles), La Biennale_ Paris, Biennale Internazionale di Antiquariato (Rome), Biennale Internazionale di Antiquariato di Firenze (BIAF), Modena Antiquaria, Gotha (Parma, Italy). It offer the documents regarding the selled objects, Customer can have every kind of assistance, such as: transport, assembly, restoration, upholstering. Customer care is not limited only in inserting the historical piece, but it involves, if required, a complete restyling of the house, through the study of personalized pieces and design, respecting the styling as well as the house and the person character. In 1994 the management was given to Mr. Mattia M. Martinelli, Mrs, Roberta Tagliavini's son, president of Fiori Chiari antique trade dealers. With juvenile strenght, he improved and enlarged the Gallery in Via Fiori Chari N° 2, acquiring new spaces, such as the gallerys of Via Fiori Chiari N° 3, Via Solferino opposit N°3 and P.zza Formentini N° 4/6. In 2017 robertaebasta opens a branch in London in 85 Pimlico Road. Mr. Martinelli is member of the board of directors of Brera's Antiques Trade dealers Association and expert of Decorative Art of the XX century for the Milan Courthouse. Robertaebasta deals the best known names of Art Decò and of Italian and Foreign XX Century. In the Gallerys it is possible to meet works of the most famous authors, including: Terragni, Giò Ponti, Borsani,Bugatti & Quarti, Lancia and Buffa concerning furniture; Venini, Barovier, Seguso, Salviati and De Paoli concerning glasses; Richard Ginori, Lenci, Gio Ponti Melandri, Chini e Nonni concerning ceramics and porcelain. In addition to this, Robertaebasta is specialized in the French Art Decò, showing works signed by Lalique & Daum for glasses; Rulhmann, Leleu, Prinz and Arbus for furnitures. Recently the collection has been enlarged with furniture, lighting, artwork, prototypes and design objects from 1950 to 1990. In the last years the collection can count on some important pieces of modern art as Scheggi, Bonalumi, Calder, Warhol, Fontana and Burri among others.

Masterpiece London is the unmissable art fair where visitors can view and buy the finest works of art, design, furniture and jewellery - from antiquity to the present day. The fair offers an unparalleled opportunity for new and established collectors to discover exceptional works for sale, from international exhibitors spanning every major market discipline.

Launched in Milan in 1961 as a vehicle for promoting Italian exports of furnishing and accessories, the Salone Internazionale del Mobile is the global benchmark event for the furnishing and design sector.